What course do you study and what year are you in?

I’m studying Philosophy and Psychology, in my last year now. 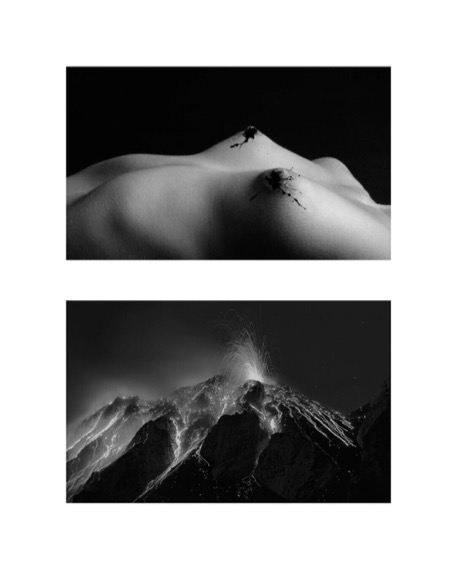 What does your work aim to say?

My work brings forward conceptual connections between seemingly contradictory or unrelated images. In this project, I looked at female body parts that have been associated with stereotypes of femininity and submission, for example, the female body as a love-making device, as a scapegoat, or as a tool. Then, I looked at objects that resemble those body parts but are, on the contrary, symbols of empowerment, like blades or erupting volcanos. By emphasizing the similarity between those images despite their contradictory connotations, I aimed to redefine the vulnerability of the female body as a form of empowerment.

Why did you choose this aim?

It fascinates me how the exact same shape or imagery can have different connotations depending on the circumstances. The curves and points of the female breast are remarkably like the ones of a volcano, but, unlike the natural wrath associated with volcanos, breasts have been stigmatized and forced into concealment through sexualisation. Besides the feminist implications of this comparison, my work is an invitation to reconsider all kinds of double standards; it is important to look at the bare similarity of things, without being carried away by socially-imposed preconceptions.

Who/what are your biggest influences?

The conceptual aspect of my photography is heavily influenced by the work of John Hilliard. The way he selectively focuses on fragments of his surroundings, and especially the way he combines those fragments in his photo series to demonstrate the fluidity of perception has been central to my work. In terms of content, my biggest influence is Francesca Woodman. Her fragile yet empowering depictions of the female body through unsettling nude poses are admirable pieces of work.

What made you decide to use your particular medium and style?

Unlike other mediums, which create new objects and concepts from scratch, photography is a reconstruction of existent reality. What the lens captures is a piece of a puzzle that can be rearranged in countless ways; by taking bits and pieces of the world and combining them in novel ways through a photo series, one can reconstruct and challenge the “ordinary” way of seeing things. This is directly related to my project, which means to redefine the existent connotations of womanhood. My aim was to reconstruct, rather than give birth to a concept, making photography the most appropriate medium to convey my message.

What made you choose this (these) piece(s) for this exhibition?

These pieces belong to my “Touch me if you dare” photo series. Even though I could go on and on comparing the female body with objects in its surroundings, I chose four pieces that I considered to be the most representative of traditional roles of womanhood: the saint, the lover, the scapegoat and the tool. The four body parts I have included (face, nape of neck, breasts, legs) depict the female body from head to toe, which enables the pieces to reconstruct the body fully.

What was your artistic process of creating these pieces?

Over the course of last year, I had taken various “fragmented” images of the female body. Then the comparisons followed. I shot images of visually similar objects, which had empowerment as a common factor. It strikes me how the link between vulnerable body parts and empowering objects was not forced; the conceptual connection occurred almost naturally. I believe that this tells a lot about the pressing need to reconsider our notions of vulnerability.

Are you on any social media that people could follow up on?